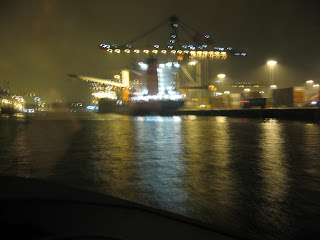 Tonight we went for a dinner cruise on Rotterdam Harbour. It was amazing. Rotterdam Harbour is the busiest port in the world and runs 24hrs/day.  The evening was a bit misty so I apologise for the quality of the photo. The ship in the photo was being unloaded as we passed by, it was huge. We were told it could carry 8000 20ft containers, but that it was only a small one, the big ones carried 40000.
Posted by Robin Schaefer at 16:04 No comments:

Flowers as far as the eye could see 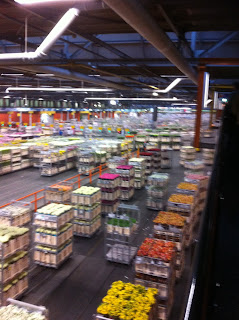 Today we visited Flora Holland flower auction.  It was amazing!!!!  I have never seen so many flowers in the same room at one time.  This picture shows only a very small part of this huge setup. The buckets and boxes of flowers extending off into the distance as far as the eye could see.
Posted by Robin Schaefer at 15:49 2 comments: 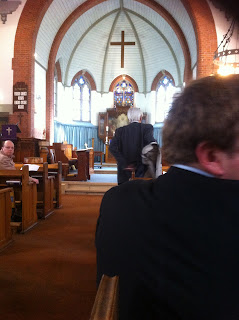 Sunday morning we went to church at St Marys Anglican Episcopal Church in Rotterdam. The worship service was in english, and many parts of the liturgy were very similar to the Lutheran liturgy back home. I think the locals were somewhat overwhelmed by 20 of us foriegners invading there small church, but they were very welcoming and made us feel a part of their church family.
Posted by Robin Schaefer at 15:41 No comments: 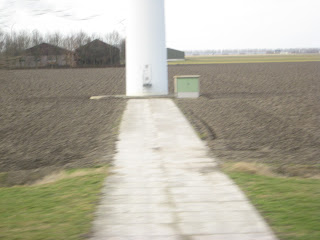 It is very striking how neat and tidy the Netherlands are. The Dutch are very precise and seem to use every square centimetre of their small country. Notice in this picture how they have cultivated right up to this concreted path leading out to a wind turbine.
Posted by Robin Schaefer at 15:23 No comments: 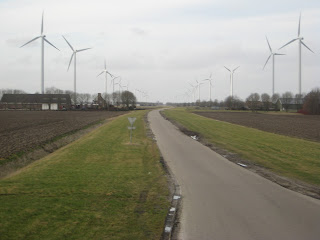 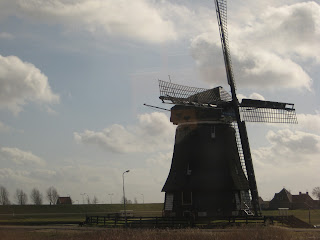 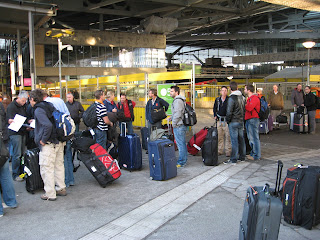 Well my Nuffield adventure has officially started with the Contemporary Scholars conference which is in the Netherlands and London. After arriving in Amsterdam (6.30am 26.2.12) following 29hrs in transit, 19hrs flying time from Oz we caught the hi speed train to Rotterdam. We all had no Idea where our hotel was, but after an amusing 20minutes trying to work out which of the four signs, all pointing in a different direction and reading bus, we were supposed to follow we finally managed to hjack one and find our hotel.

After checking in to our Hotel and freshening up we headed off on a bus to have a look around.

The Netherlands really is the land of Windmills, only now there is no longer many of the traditional windmills that were once used to pump water from the land behind the dikes, there are literally thousands of wind turbines spread across much of the country landscape.
Posted by Robin Schaefer at 15:17 No comments: