This morning I met with Ken Ring a world renowned weather forecaster who uses the effect of the moon, sun and planets to generate annual weather forecasts for , , and . Ken lived in an RV on a beach for a time during his life. He noticed that severe storms were associated with king tides. This got him thinking that perhaps the moon had an affect on the atmosphere and the weather just as it affects the oceans. This  started him studying the affects of the terrestrial bodies on the weather.  His research has even traced this style of weather forecasting back to ancient civilizations. When ever these types of tools are used it inevitably raises eyebrows with mainstream forecasters; however Ken quotes published scientific papers to back up the methodology he uses.

Well this ends the world travel part of my study project, I have now left and having landed in Nadi  will begin the process of compiling everything I have learnt into my paper. I will continue to blog though so if you have found my journey interesting, stay tuned. 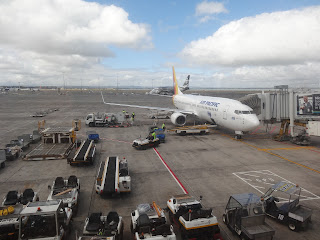 Posted by Robin Schaefer at 13:19 No comments:

Traveling from Gisborn to Rotorua the scenery is simply stunning, but you know when you are nearing Rotorua as the smell of Hydrogen Sulphide or rotten egg gas greets you. 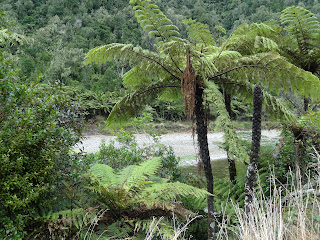 Rotorua is home to one of the most active geothermal areas within and reminds you of the forces that are at play below this . As water seeps though the surface to the super hot rocks some 4km below, pressure gradually builds up to the point where it is released via vents of steam and geysers and boiling pits of mud. The minerals brought to the surface, colour the mud and adding their own beauty. The area around the springs is a special place for the Moari tribes and is still held in their custody 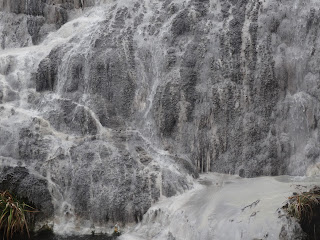 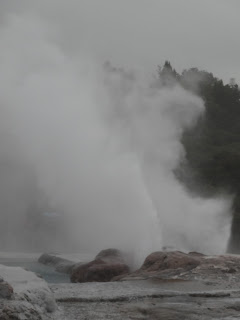 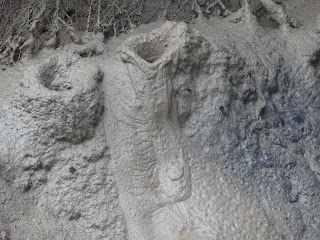 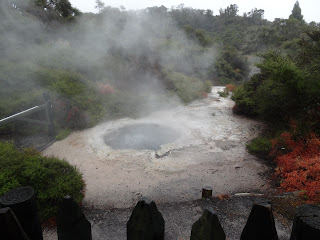 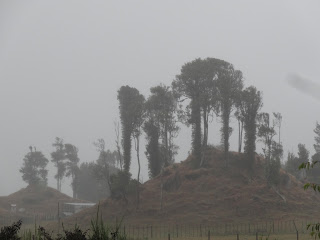 Posted by Robin Schaefer at 23:58 No comments:

As I said in one of my earlier posts is currently in the midst of a drought. Though feed is short the sheep at Wairakaia are still in very good condition Sandra, Rob, Bruce and Joe are very forward looking and use triggers to progressively unroll their drought strategy to reduce the impact of drought on their business.

This morning I helped Sandra and Rob to feed reject squash to their sheep. This is a cheap food source to help supplement the dwindling pasture reserves.

In the afternoon Bruce, gave me a guided tour around their property.  The farm is situated in an area that is quite hilly. The livestock graze the hill country while the cropping is saved for the flatter, fertile, deeper soils in the valley floor.  The fragile hill country is easily eroded and subject to landslips from time to time. To alleviate this revegetation of the most erodable land classes has occurred.  I was given a close look a some of the problems associated with erosion when during my farm tour the ute slipped into a difficult to see rut.

Posted by Robin Schaefer at 23:37 No comments:


I had a morning meeting with Nuffield Scholar, Hugh Richies. Hugh studied No Till farming for his Nuffield and currently grows Buttercup Squash, Sweetcorn for canning, maize and grass for his sheep and cattle. Hugh has 9 employees, including a farm manager for his livestock enterprise. Hughs wife, Sharon comes from an education background and has used her knowledge of staff management in that role to bring some great ideas to their farm business. 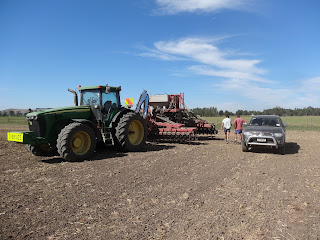 After lunch Nuffield Scholar Sandra Faulkner and I traveled 3 hours north to Gisborne, the location of their family property. As we traveled it was interesting to note the large numbers of commercial pine plantations, which support the large timber industry of this area.

The property 'Wairakaia'  is quite diversified. Their enterprises include Sheep, buttercup squash, sweetcorn for seed, maize and a citrus orchard. Sandra & Rob farm the property together with Robs sister Joe & Brother in law Bruce
Posted by Robin Schaefer at 23:22 No comments:

An early start saw me traveling from South Canterbury north toward Picton, for a ferry crossing to the North Island and to , capital of . I was fortunate to have George Orchiston also have traveling with me. George has a fascinating background and is currently working as a agricultural real estate agent working together with farmers and developers to use equity capital to help farms develop efficiencies and economies of scale.

Currently is suffering from severe drought, probably the worst in 70 years. Usually droughts in are area specific though this one has affected both the North and the .

Leaving Picton on the ferry is very picturesque as you travel through the sound. Ferrys travel hourly between the and are always full of vehicles as well as large numbers of passengers.


From we headed for which is in the area where we stayed the night with friends.
Posted by Robin Schaefer at 23:12 No comments:

This morning I enjoyed a cycle around the country side with Mikes wife Sally. It is so flat around here making a cycling a breeze.

Mike arranged some visits for me including with his agronomist and a large neighboring family farming enterprise which manages a quite diverse business. This includes, arable farming, contracting, seven dairies and a carrot washing business which Mike & Sally have shares in. Michelle provided me with an interesting insight into the systems used in running their business.

Later in the afternoon I cut my teeth on Mikes potatoes harvester.

Posted by Robin Schaefer at 01:38 No comments:

Following a 3am start I flew down to then traveled to Mike & Sally Taylers farm.
Mike showed me round his property, his enterprises include cereal crops, Specialty seed crops, potatoes for fries, juicing carrots and two dairies.

Mike also took me to the place where Phar Lap was born which turns out to be only just down the road from his place.

Posted by Robin Schaefer at 01:00 No comments:

When visiting , the zoo is a must see to get a perspective of the critters that live here, plus some great exhibits of other critters from around the world.

Following a day at the zoo, I enjoyed my evening meal atop the  , enjoying an awesome view of the  night skyline. I even watched as the Queen Mary cruise ship departed port. 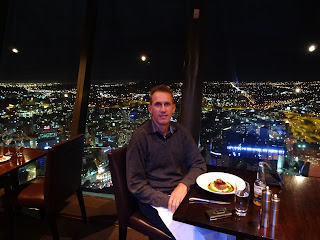 Posted by Robin Schaefer at 00:46 No comments:

Flying from and crossing the International date line, I lost a day but arrived very early in Aukland on the morning of the 10th. 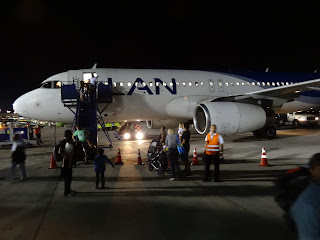 I dropped my bags at my hotel, and as it was Sunday I thought I’d check out the local church scene, I had a look on the internet and discovered a church called C3 which seemed to be embracing technology in their ministry. As I had never been to before I, I was unfamiliar with the layout, but was impressed that these guys had a system where you could text them and they would come and pick you up and take you to their church. When I got to church it was pretty obvious why they were tech savy, 2/3 of the members were probably below 40 and 1/3 below 25. Speaking to the leaders it was interesting to note the responsibility that was given to the younger members of the church. They had risen to the challenge and really created a sense of vitality within the church.  I think there is something here that could be applied on many farms, in giving the younger generation more responsibility, and allowing them to rise to the challenge. 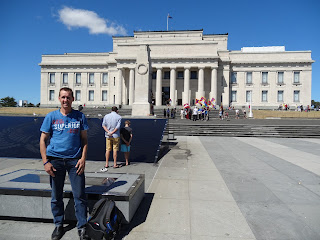 In the afternoon I went to the Aukland war memorial and museum. The displays of Maori culture were fantastic. I gained a much better understanding of the Maori wars and the development of NZ as a nation. 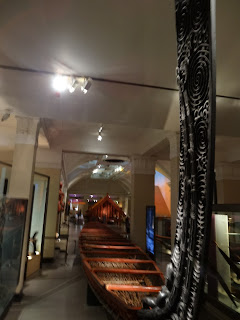 The live, dramatized, Maori cultural display was also excellent and their rhythm and singing was superb. The museum also had great natural history displays including a history of volcanic eruptions in NZ. This was very interesting from a weather perspective in the light of what I have found in my research. 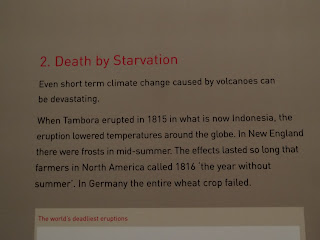 A cross sectional cut of a 1000 year old kaori tree was also among my highlights. This showed growth rings for the last 1000 years, which is essence is a 1000 year rainfall record.

Posted by Robin Schaefer at 00:32 No comments:

On my way back from Anguil to Buenos Aries I departed for the first time from my normal schedule and did not book my accommodation, this was a mistake as hotels were either too dodgy, booked out or my GPS lead me astray. I eventually managed to find accommodation in  Lujan a city about an hour from Buenos Aries. It proved to be a real treat as my hotel was located next to a magnificent cathedral. 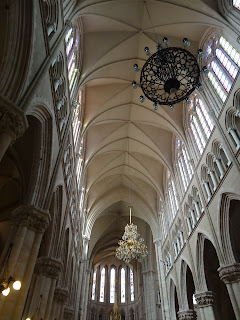 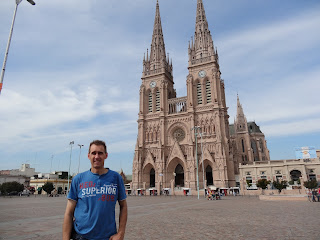 The cathedral is a neo-gothic Basilica built in honor of the Virgin of Lujan, the patron saint of . Every year more than 6 million people make pilgrimages here, many walking from . Lujan is actually known as “The Capital of the Faith” The church towers over the city landscape rising to a height of 106 m and houses the tiny 38cm statue of the virgin. 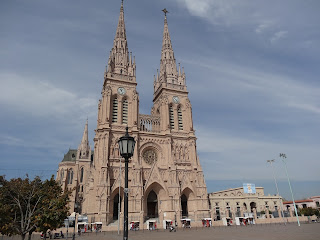 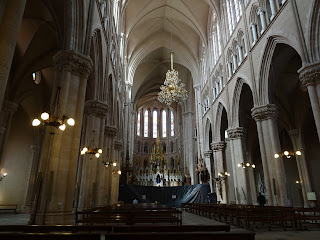 Posted by Robin Schaefer at 15:47 No comments:

The Director of INTA Anguil research station, Jesus Fernandez took me for a farm tour of the 6000ha property. This area has been using No Till for 25 years. When they were about 10 years into it they suddenly began having problems with large flocks of Pigeons and Starlings. The birds were able to find a great food source in the stubbles and bred rapidly so that the flocks number in the thousands. This has become a real issue across La Pampa with the birds devouring large quantities of ripening crops.


Posted by Robin Schaefer at 15:23 No comments: