An early start again saw us leave the hotel at 6.30am for Millheim, a small town 300km west of . We met with Bryan Snyder Executive Director for Pennsylvania Association for Sustainable Agriculture. A very interesting briefing that challenged most of us. shared with us a concept that they are growing called “Community Supported Agriculture”. It provides a way for farmers, especially smaller farmers to pre-sell some of their seasons produce to people in their local community.   The community members then weekly collect baskets of produce from the farmer. The farmer wins because his crop is effectively financed and he gets a better price than selling wholesale. The consumer wins because they get cheaper food than they can get at the supermarket and they know the farmer who is producing their food. Although I see this as really only niche marketing, believes that it is a concept that could be expanded. He said that it is already growing rapidly throughout at the rate of 15% per year. 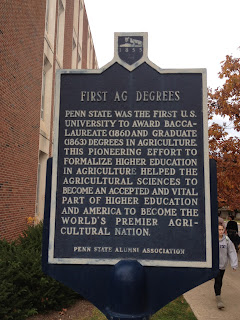 Our next stop was Penn State University (PSU) where we met with the PA Rural Urban Leadership (RULE) team.   PSU is one of the top universities in the , It started as a rural university but has grown way beyond that. It has 80,000 students, 40,000 at the main campus and 40,000 in its 22,000 branch campuses. The town surrounding the university is 80,000 people, half of which are the students. Executives from the Uni shared with us how students needs are changing, as is the way of educating them. We also learnt of the amazing support that the Alumni from the university give and the huge fundraising effort to raise $2 billion to go toward scholarships. We finished with a student guided tour of the Uni and a visit to the renowned Ice creamery. 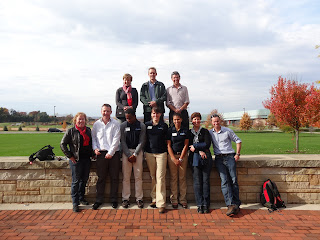